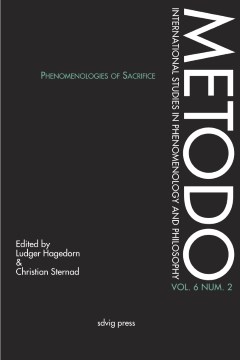 This issue investigates the key concept of sacrifice, drawing on the philosophical tradition of phenomenology and exploring the historical, sociological, political, and religious dimensions of sacrifice. Over recent decades, the question of sacrifice has prominently been addressed in the works of René Girard. While this strand of research examines sacrifice predominantly in its constitutive function for the overcoming of violence and the (re-)installment of peace in a given community, other approaches stress its role of enacting a radical break with theeconomy of exchange. Building on classical theories of solidarity and the gift (Émile Durkheim, Marcel Mauss), these approaches emphasize the dimension of freedom and responsibility as being characteristic of self-sacrifice (as e.g. in Jan Patočka or slightly different in Jacques Derrida). The most drastic break with the economy of exchange is probably articulated in the work of Georges Bataille where sacrifice becomes inseparably linked to expenditure and overspending. While historically sacrifice often became an issue of philosophical reflection in the context of decisive political battles and wars (especially during the First World War with authors such as Max Scheler, Ernst Jünger, et al.), it is precisely the pure phenomenality of sacrifice itself, i.e. its capacity to make the givenness of the gift visible, that is strongly articulated in current debates (most explicitly in the work of Jean-Luc Marion). Against this broader philosophical background, contributions could also tackle historical questions, such as the role of religious figurations and religious metaphors for political communities, or the mystic of sacrifice that evolves around its meaning for wars and terrorism. Finally, as nicely indicated by the German word "Opfer" (that means both, sacrifice and victim) the topic of sacrifice also invites for an extension into what may be called “cultures of victimization,” i.e. the growing interest in patterns of victimization, self-victimization and its societal impacts. The following fiels are of special relevance: A) Sacrifice and Religion B) Sacrifice and its Role for the Building of Communities C) Sacrifice and War D) Sacrifice and Terrorism E) Sacrifice and Waste F) History and Cultures of Sacrifice G) Sacririfice and (Self-)Victimization

The economy of sacrifice and embodiment

Sacrifice as a political problem

Sacrifice and World War I