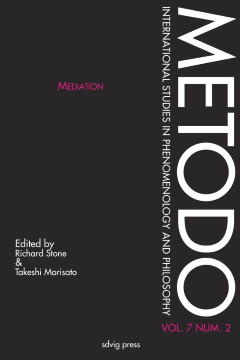 Is there anything that is truly given immediately? This question seems to of crucial importance for Phenomenology, a field perhaps known most principally for its attempt to return directly to the “things themselves.” The seeming simplicity of the idea is appealing: after all, where better for us to start in any philosophical investigation than with things as they appear to usin their most pure or “immediate” state? When put in its historical context as well, Husserl’s phenomenological project could even be interpreted as a breath of fresh air in the midst of the environment of early 20th century philosophy in comparison with the seemingly constructive philosophy of its Neo-Kantian contemporaries. Indeed, rather than starting with a merely systematic account of our cognition and reality, is it not better for us to first return to the world just as it is given to us in perception or intuition in order to have a more faithful account of these issues?

Metaxological intermediation and the between

Is there a problem of writing in historiography?