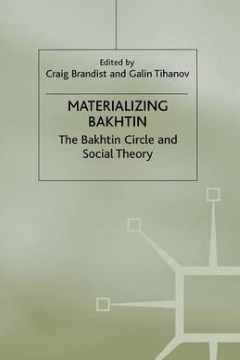 This chapter examines the vexed question of the relationship between the Mikhail Bakhtin and Marxism. The question is "vexed" because for some years now there have been many rival attempts either to claim Bakhtin as a Marxist, or to present his work as fundamentally anti- Marxist. In the former camp have been such important commentators as Allon White and Tony Bennett, while the latter has included such specialists as Michael Holquist, Caryl Emerson, Gary Saul Morson and most Russian interpreters. The hostility of the last towards an ideology which was claimed by the Soviet state as its guiding principle is understandable, but even there important academics such as Vladimir Bibler, Leonid Batkin and Aron Gurevich have seen aspects of Bakhtin's work as quite compatible with Marxism. Despite the attempts of most Russian interpreters, echoed most vocally by Emerson, to cast Bakhtin as a religious or even theological thinker, having an attitude towards politics which is no further left than Western liberalism, the issue of Bakhtin's relationship to Marxism refuses to lie down. This is not surprising since many of Bakhtin's formulations find significant parallels in the work of the most significant Marxist theorists, from Lukács and Benjamin to Gramsci.1