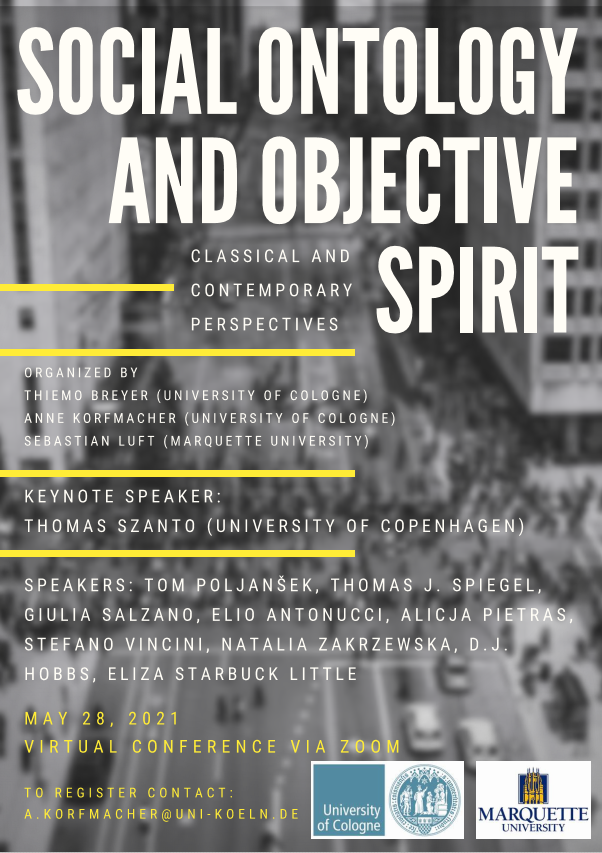 As of the early Phenomenological Movement, the topic of “social ontology” has been a dominant and fruitful field of research on the part of early scholars, under different headings: intersubjectivity, sociality, ontology of social communities, and others, and investigated in different manners by many classical phenomenologists: Besides Husserl and Scheler, also Alexander Pfänder, Gerda Walther, and Edith Stein have made significant contributions to understanding ourselves as essentially social beings. The topic of “social ontology” has recently been rediscovered and developed further both in contemporary phenomenology (Salice, Schmid, Szanto, Zahavi, etc.), as well as in contemporary philosophy of mind (Bratman, Gilbert, Searle, Tuomela, etc.). However, while contemporary phenomenologists freely draw from classical phenomenology, the same cannot be said of those from the rich tradition of the philosophy of mind. We believe this is a missed opportunity.

Moreover, while researchers interested in social ontology focus primarily on the intentional structures of social groups or communities (“collective intentionality”), what is downplayed, oftentimes, is what philosophers, starting with Hegel, have called “objective spirit.” We claim that this term can be usefully employed for what is missing in a purely “intentional” analysis without espousing any metaphysical overtones. For instance, Cassirer’s philosophy of the symbolic forms of culture has been called a “philosophy of objective spirit” (Kreis) as focusing on, and taking its cue from, the objectively available achievements of culture (such as language, myth, science, or art). The main idea here is that one cannot even begin to understand the intentional processes on the part of communities without starting from what is objectively available (especially in the case of past cultures).

The guiding idea of this conference is that to fully grasp the phenomenon of the social— ourselves as social creatures, embedded in a world as product of our making—one has to keep both aspects in mind. Hence, we invite papers that contribute to an investigation of a more encompassing social ontology including intentional structures as well as cultural forms and contexts, both with historical or systematic interests, including approaches from phenomenological, hermeneutical, analytical, or metaphysical perspectives.

Please send a title and abstract to Anne Korfmacher (a.korfmacher@uni-koeln.de) no later than April 18. The conference is open to all researchers.